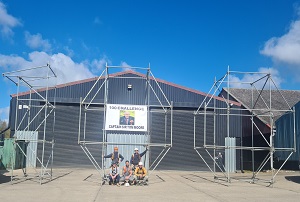 Captain Tom inspired the nation by sharing his hope for brighter days as he walked 100 laps of his garden to raise money for the NHS. This year, to celebrate Captain Tom’s 101st birthday and to honour him and his amazing achievements, The Captain Tom Foundation asked everyone, of all ages and abilities, to take part in the Captain Tom 100 Challenge and help raise funds for the Royal British Legion.

Total Access Scaffolding (T.A. Scaffolding) decided to give something back to The Captain Tom Foundation and the Royal British Legion by building a huge “100” out of scaffolding, measuring 21ft tall and 80ft wide.

All of the T.A. Scaffolding staff donated their time & wages as their contribution, so Pickford Builders decided to show our support by making a donation towards their collection!

“Sir Tom did so much for us and the NHS over these difficult times that Total Access Scaffolding thought that we would try and give something back to the “Sir Captain Tom” charity and the Royal British Legion.

Due to everyone’s support and generous donations to the Captain Tom 100 Challenge, we have raised a grand total of £1,671.00.”

To get involved or make a donation to The Captain Tom Foundation visit www.captaintom100.com.

About the Kate Gunner